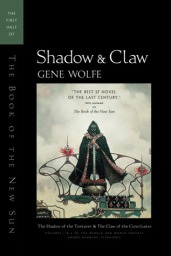 It’s no secret that I love me some Game of Thrones on HBO and A Song of Ice and Fire literature. There’s a sort of dead space right now with no new episodes of the show and the release of the 6th book still off in the indeterminate future somewhere. For many of us, this space needs to be filled, and as such, I’ve bravely taken it upon myself to venture out into the wilds of Powell’s Books‘ high-literary sci-fi/fantasy section to see just what the heck else is out there!

I should mention right away that I’m actually giving volumes 1 & 2 of Gene Wolfe’s 1980s The Book of the New Sun (Shadow & Claw) a 4.5 star rating — there were only a few small (but somewhat significant) details that kept me from giving this book 5 stars . . .

. . . Wolfe keeps his story fresh by using terms that jar the reader in their alien appearance to describe everyday things — especially the names of the flora and fauna — though never so much that it alienates the reader. Smilodons and other creatures that have or may have at one time lived on the reader’s own Earth inhabit Wolfe’s universe. He takes special care in keeping the reader guessing at which parts of his narrative might actually even be factual historic (Earth) record, though he weaves it into his plotting that it’s almost indistinguishable from his imagination.

Ultimately, it doesn’t matter. It adds to the narrative’s mystique and builds the intricate story, and that’s what’s most important. . . .

Check out the rest of my review over at InDigest Magazine!!

On China Miéville and Pushing Boundaries 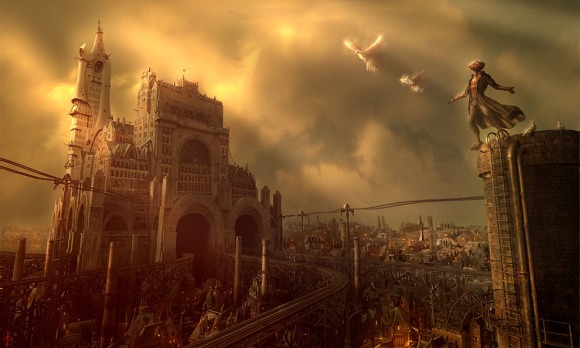 “It’s a risky novel and it is not always successful. But those risks are important and should be encouraged, because even when failing, they lead to future promises of success.”
~ Eddy Rathke in his Goodreads review of China Miéville’s 2012 novel, Embassytown.

I like what Eddy wrote here and I think this is true in/of a lot of China Miéville‘s work. Miéville is really interested in pushing the boundaries of what’s been historically accepted as possible. It definitely takes a sense of fearlessness to say: “Fuck it, I’m trying this regardless of what anyone else thinks!”

. . . and it really seems to work for Miéville, more often than not.

As an aside (though more or less tangentially-related) remark: Miéville’s vocabulary almost never ceases to amaze me. Not only that, the way he incorporates the vocabulary — stylistically — never pulls the reader out of the narrative (N.B. this is at least true for me), but rather it has a way of working with the story, rhythmically. It’s ostensibly an evolution of Twain’s “lighting/ lightning bug” analogy — the words Miéville chooses are not just impressive, they’re absolutely the right choice for the given sentence. (I think a good example of another SF/F series I’ve enjoyed, but the words often miss their mark is David Anthony Durham’s Acacia trilogy.)

Worth a mention: Perdido Street Station is just impressing the hell out of me right now! I can’t wait to see what the whole “New Crobuzon” series has in store!!

I reviewed Viriconium on Goodreads

I felt compelled to write a review of the 3 novellas that make up most of the Viriconium omnibus (the last quarter of the book is comprised of collected short stories centered on the city of Viriconium). I posted it over on Goodreads!!

(The cover to the right is the one I wish Bantam used for the American release.)

In these stories–like the ailing artist, Audsley King, in Viriconium‘s third novella–Harrison is painting with words, beautiful water colors and rich oils. For a world as bleak and unforgiving as the one that converges upon Viriconium (a city like no other. a story without end…), the lyrical descriptions are truly beautiful and masterfully crafted. I’m beyond question at a loss for how impressed I am with this book so far!. . .

His words are so many things simultaneously: sad, hypnotic, haunting, hilarious, sage, prescient. He’s clearly a master of his craft and he keeps his blade (his pen), honed and sharp. Viriconium has been labeled science-fiction, fantasy, even steampunk; but I’d argue at best it’s all of them, but more accurately, it’s its own, singular work. It demands and dares readers to pick it up, challenges them to find the nuances woven within its tapestry. . . .

Needless to say, I really liked this book! 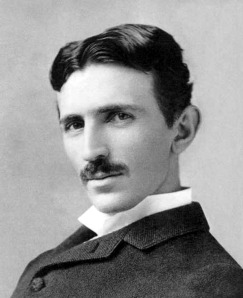