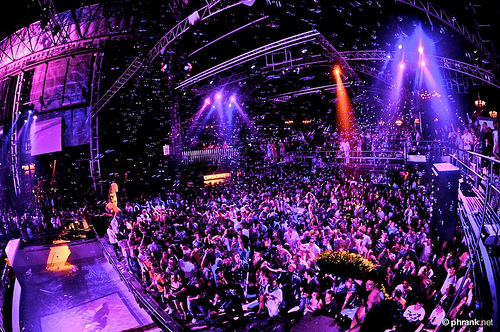 Though they might disagree — or think it’s silly/weird/etc. — all the young aspiring electronic music producers/DJs should definitely go back and listen to some of the artists that tilled the soil for their “new” EDM to take root (that is to say, electronic dance music has been a thing long before EDM became nearly synonymous with Dub-step and Trap). Too many kids are trying to create stuff that . . . isn’t very good, but a lot of that can be traced to a lack of familiarity with what came before [them] (not to mention a lack of some basic music theory, but that’s an entirely other thing for another post, altogether. . . ).

It’s probably important to remember that this isn’t a “Greatest of All Time” list or an eclectic list of hipster favorites no one’s ever heard of [though some of the artists are fairly strange (e.g. Aphex Twin)]. It’s a list of artists who were instrumental in making the EDM scene what it is today. It’s actually a list most people who are producing the best electronic music right now are already familiar with; I’m really just trying to get the new generation of producers and DJs up to speed on their music history. It’s character building! (or something*) Of course I won’t be offended if people don’t dig the stuff on the list, but the quality/talent level of the below artists in their respective genres has already long-since been established.

I suggest, first and foremost, listening to Orbital and The Prodigy (Fat of the Land, omfg…), then Paul Oakenfold and BT (especially from the 1990s — Ibiza, anyone?!); BT more or less invented the use of glitches in EDM); Photek to see where DnB hit a high-water mark with “Modus Operandi;” Future Sound of London’s “Papua New Guinea;” Kraftwerk (anything); Tricky (ibid); UNKLE, Portishead (especially Dummy), and Massive Attack to get an expert taste of Trip-Hop; the evolution of Beck’s music from “Odelay” onward; ALWAYS relevant are The Crystal Method; Dirty Vegas, if nothing else for the “Days Go By” video; Dan the Automator (who you’ll realize you’ve heard before even if you didn’t know it before); Imogen Heap just because; Justice; AND Underworld (just to list a place to begin).

The Chemical Brothers and Dust Brothers wouldn’t be bad picks for this list either, and I’d be remiss to not also include Paul Van Dyk, Tiësto, Armin van Buuren, and NERO since they’ve all been around for a long time and have evolved their sound to stay relevant!

These are just a handful of artists who influenced me to start cobbling together beats in my basement in the late 90s. It’s never a bad idea to Know Your Roots!