So I Was Thinking…

I was also thinking of the other bazillion social media feeds to which I’ve attached my name: Tumblr, Twitter, Facebook, etc.

I’m trying to figure out how to keep things from becoming redundant. This is trickier than it sounds.

My thought is to keep the blog updated once a week, Tumblr once a day, and Twitter, well, if you follow me (@JoeMOwens) you know keeping up with that won’t be a problem. Facebook, I’m just saying whatever to. It’ll probably get updated close to every day but it might not. We’ll see.

I’ve got a problem when it comes to parsing out what I want to post where. It causes me anxiety and paralysis by analysis.

I have to make sure I’m creating my share of content for InDigest and Specter, while also posting stuff on Cat13. Tricky, tricky…

This would be an entirely less significant problem if only I were a more prolific writer. But I’m not.

So we’ll just have to see how it goes…

Good Timing Is Not My Forte: A 34 Day Recap 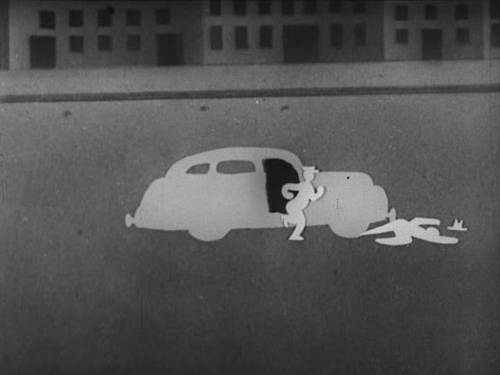 Punctuality and good timing are not the same thing. I’m fantastic at the former. But the latter? … Not so much.

For example: This is my first actual blog post in a month–a month in which my first book was published (Shenanigans!, Grey Sparrow Press, 2012) and another edition of the Association of Writers and Writing Programs (AWP) conference came and went in Chicago. The word from Category Thirteen? Nothing.

To call my timing “bad” is perhaps an understatement.

However, all is not lost! The book is 100% available and in-stock, and can be purchased from Amazon for $9.99 by clicking here. Initial reviews and word of mouth feedback are good, so we’ll see how that trend holds up… ( :: drums fingers nervously :: )

My AWP 2012 experience can probably best be summed up as “minimalist.” By that I mean, I spent something approximating 90% of my time laid up in my hotel room with 7th-Level-of-Hell back pain. Which, i should mention, stemmed from tripping–and subsequently rolling my ankle–over a curb while walking to my hotel, before I even ventured to pick up my customary AWP registration swag(!!). The clumsy trip/stumble/ankle-roll maneuver was enough to *tweak* my back in such a way that carrying a heavy backpack over the next couple days would exacerbate the pain to the point of incapacitation.

In other words, instead of doing fun conference-y stuff, I spent almost 24 hours just laying in my hotel bed the day before I flew back to Omaha.

The upside is that, in the small amount of time I got to spend at AWP actually conferencing, I “met” a shitload of rad people! I put ‘met’ in quotes because they were people I’d spent a great deal of time chatting with on Twitter and Facebook, but had never met in real life (a phrase quickly losing its concrete meaning).

END_OF_DOCUMENT_TOKEN_TO_BE_REPLACED

Party In Your Eye-Socket! 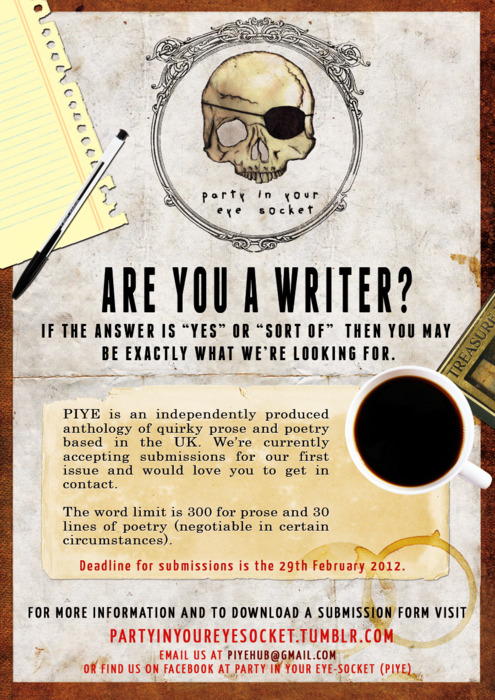 CALLING ALL WRITERS: please reblog and help get the word around about this exciting new project.

If you haven’t had a chance to check out Specter Literary Magazine yet, you should! Oh, I should also mention that I’ve landed myself a gig there as a columnist– two posts so far! Click right here.

It feels weird being done with my MFA program. Now I’m attempting to find some sort of job in the real world which is… fun… I guess.

Oh, and definitely keep tabs on the InDigest blog. Lots of fun stuff going on there! I’ve been the blog editor there for a little over a month and really love it!

Also, I’ve had a couple book reviews for The Iguana Complex and Entrance to a colonial pageant in which we all begin to intricate published on PANK‘s blog.

The last bit of news is that my promotion to Associate Editor at Grey Sparrow Press is going well. The new issue is fantastic and we’ve got a killer new site design in the works.

Error: Twitter did not respond. Please wait a few minutes and refresh this page.